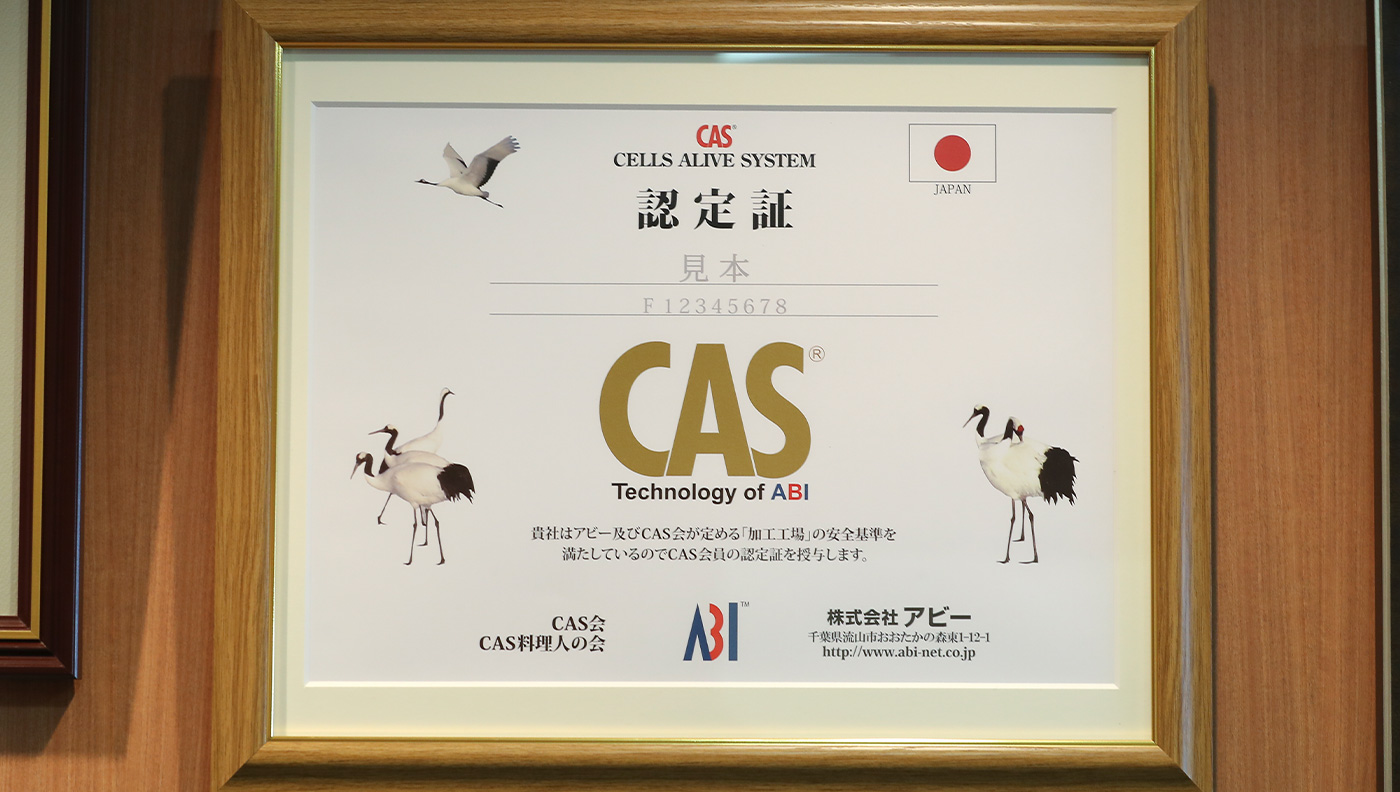 The value of ABI

We established ABI in 1989 and first commercialized the CAS engine in 2002. Prior to that, I had been working on the development of technology to lower the freezing temperature from -50°C to -80°C, but when some chefs pointed out that “There is a need not only to lower the temperature but also to develop technologies that make use of tissues to reproduce deliciousness,” I switched to the idea of “making use of tissue.” Incidentally, the name CAS is now being used; however, the product name when the product was first launched was “mammoth.” The image is of a mammoth found frozen in ice in the Siberian permafrost tundra. When I heard that even the flesh is preserved, I wanted to achieve this goal.
The world’s population is now currently at 7.7 billion. In 30 years, however, this number is expected to reach 10 billion, thus raising concerns about the emergence of a food crisis. Vegetables harvested this morning can be eaten deliciously by roasting them 30 years later. This type of technology will become increasingly required. We believe that ABI has the responsibility of further refining the performance of the CAS engine for the future of the planet.

Maintaining the deliciousness of delicious food while providing food safety
and security to the society and the planet.

Japan is a country with a culture of consuming raw seafood as sashimi. However, there is no traditional culture of consuming seafood in the Western countries. In Europe and the United States, for example, seafood has to be frozen. However, first-class chefs do not use ordinary frozen foods. This is because food cells break down when frozen, adversely affecting the umami taste and flavor. We want to develop a freezing technique that can be selected by chefs who are familiar with the critical role of ingredients in cooking. The CAS engine was conceived based on this desire. Raw vegetables and seafood are maintained as fresh as possible and the oxidation of oil in fried foods such as tempura, pork cutlets, gyoza dumplings, and karaage fried chicken does not occur, so the deliciousness and aroma can be reproduced. Broiled and grilled fish can be stored for a long period of time while freshness is ensured. The taste of cooked rice is the same as just immediately after it is cooked, and the aroma and crispness of nori seaweed is utilized fully in rolled sushi. Boiled spinach retains its vibrant green color without dripping, and the aroma, umami, chewiness, and texture are reproduced, and the same is observed for bok choy, green soybeans, and mushrooms. Maintaining the deliciousness of delicious food while providing food safety and security to society and the planet. This is precisely ABI’s mission.