About the CAS Engine

Within the freezer, a special CAS generator is used to uniformly apply eight combinations of CAS energy to cell tissues, thereby vibrating the water molecules within cell tissues. In this manner, the ice crystals that are formed are refined without water collecting and these crystals freeze while protecting the cell walls and cell membranes of food. As the world’s first revolutionary technology of its type, the CAS Engine is currently being used in a broad range of fields from food to medicine and applied physics.

CAS is registered as a trademark by ABI Co., Ltd.
Please beware of products that imitate CAS.

The “CAS Engine” reproduces the same tastiness of food before freezing.

The CAS Engine uses a weak electric current to maintain water molecules in ingredients such as agricultural products, seafood, meat, and other food products in dishes in a supercooled state. The quick freezer equipped with a CAS Engine activates the water molecules in ingredients, resulting in a state of supercooling (−6°C to −7°C) that instantly freezes the food and water molecules and prevents the ice nucleus on the surface from expanding. Therefore, the same tastiness and freshness before freezing can be reproduced even after thawing because the food is extremely close to its original condition. 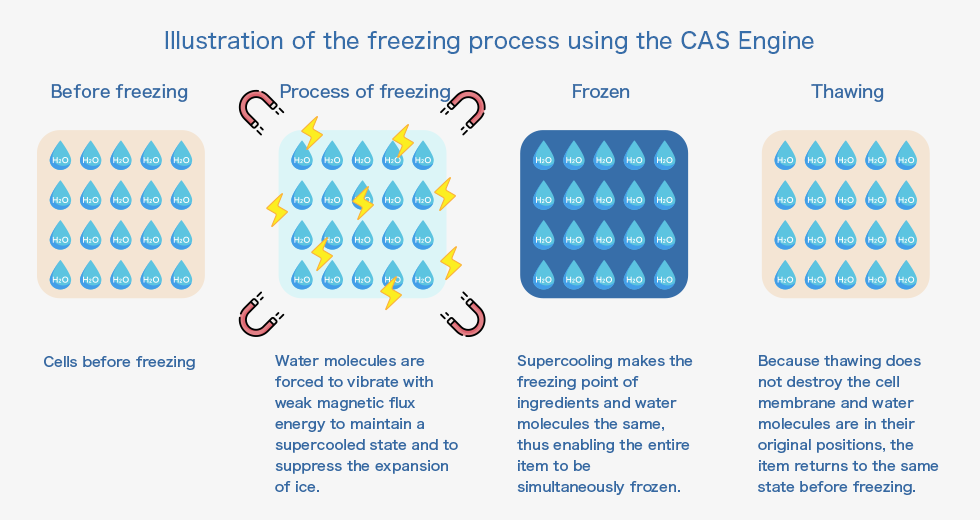 In conventional quick freezing, cold air of -35°C to -45°C is directly blown onto the target ingredients. This indicates that ice that is not visible to the naked eye is formed on the surface and, as this ice expands, water molecules in sections that are not frozen are sucked up by the ice nucleus onto the surface by capillarity action, thus causing the ingredients to expand. Consequently, the cell tissues of the ingredients are destroyed and much of the flavor and aroma is lost. 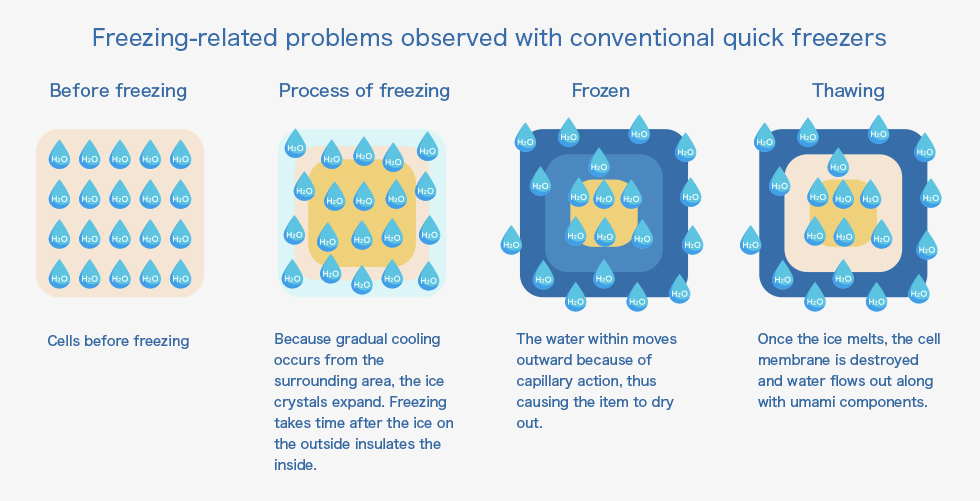 ● The ice barrier phenomenon
This is caused by freezing with the force of an internal temperature of -35°C to -45°C or forced cold air. First, the surface freezes to form a barrier, after which the next barrier is formed. Because this process takes considerable amount of time, water molecules freeze layer by layer. This causes adverse outcomes such as water separation and drying out in the ingredients themselves.